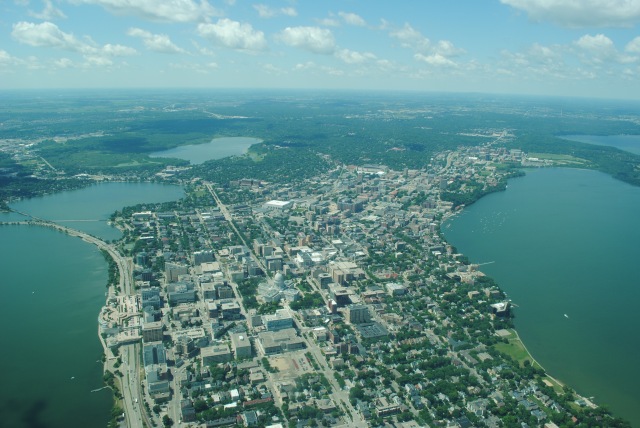 However, there are other ways to describe a city’s effects on its climate. For instance, how does urban warming affect demands for heating and air conditioning in buildings? What does it mean for the vegetation and natural areas within a city?

We were curious about these questions for the Yahara Watershed, since understanding the effects of the urban heat island can indicate ways we might make our cities more resilient as the climate warms. Our findings describe these effects in detail for Madison, the watershed’s major city, and were recently published in the International Journal of Climatology.

Urban plants may be protected from freezing for longer

For example, in rural places around Dane County, the last spring freeze in 2012 occurred on April 25th, on average. In downtown Madison, however, no freezes occurred after April 7th.

Similarly, in the fall of 2012, the first freeze occurred on September 29th in rural areas, but downtown Madison did not experience its first freeze until October 23rd.

These maps show the average date of the last spring freeze and first fall freeze in Madison from 2012 to 2015. The black areas near the center are lakes, and the black lines show urban boundaries. Downtown Madison is the red area in the center, where the heat island effect is most intense. Figure modified from Schatz and Kucharik (2016).

So in both spring and fall, Madison’s heat island added a few freeze-free weeks to the growing season. This could provide a potential buffer against freeze risk for urban plants and gardens. There are a couple of important caveats to keep in mind, however.

First, we recorded our data at a height of 11 feet, using temperature sensors installed on utility poles. But many sensitive plants grow nearer to the ground, where they may encounter different temperatures and freeze risks.

Second, small-scale differences in where plants grow—such as out in the open or under the shelter of a tree—can determine whether freezes and damaging frosts occur. Plants in open areas are more vulnerable to freezing at night, while plants under shelter tend to be more insulated.

Nonetheless, Madison’s urban heat island prevented many late spring and early fall freezes at 11 feet, and we suspect this buffering effect occurs near the ground as well.

In Madison, we measured the heat island’s effects on how many days in a year buildings need to be heated or cooled. Between 2012 and 2015, downtown Madison recorded an average of 25 percent more air-conditioned days and 6 percent fewer heated days than rural areas.

This suggests that a building located downtown would require 25 percent more air conditioning and 6 percent less heating than the same building in a rural area, all else being equal.

At first glance, the increased cooling demand seems to dwarf the energy savings in heating. However, Madison uses more energy for heating than for cooling, so the two effects roughly cancel each other out in an average year—although not necessarily in an unusually hot or cold year.

Nevertheless, there is a circular relationship between heat islands and building energy demands. By simply changing outdoor air temperatures by a few degrees, heat islands can affect indoor temperature needs. In other words, buildings create heat islands, which in turn modify the heating and cooling needs of the buildings.

It’s hard to talk about the implications of this interesting factoid in a meaningful way, however. Essentially, the best (and virtually only) way to lower energy costs is to make buildings more efficient, change thermostat settings, and/or install solar panels. But understanding the heat island’s influence helps us better understand how the dynamic system that is a city would work under the effects of a changing climate.

Schatz is a postdoctoral researcher on the UW-Madison Water Sustainability and Climate project.