Urban plants offer city dwellers many benefits, such as improved health and decreased crime and pollution. And now we have even more reason to green our cities.

A new study from the Water Sustainability and Climate project at the University of Wisconsin-Madison indicates that adding more greenery to the urban landscape could help urban vegetation cope better with the summer heat and a warming climate. In other words, the more plants in a city, the merrier they all are. 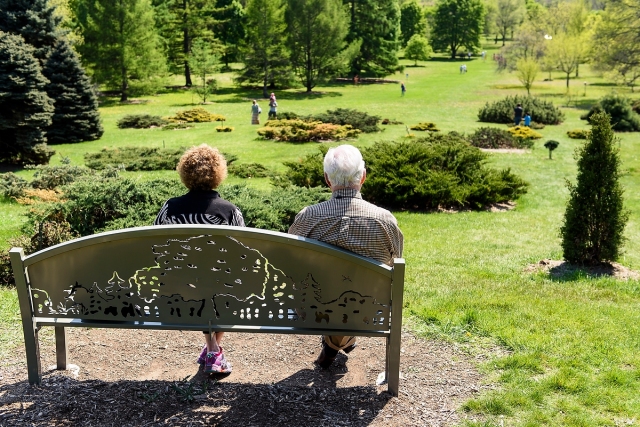 Urban parks, like the UW Arboretum in Madison, help mitigate the heightened water demand plants experience due to the urban heat island. Photo by Jeff Miller/UW-Madison

According to the study, published in Geophysical Research Letters, urban plants need more water than their rural counterparts due to the urban heat island effect, the phenomenon when a city’s heat-retaining built surfaces create higher air temperatures than those in its rural surroundings.

The higher urban temperatures cause higher rates of evapotranspiration, or the movement of water from soil and plants into the atmosphere. Since hotter air can hold more water, a city’s atmosphere is thirstier for water from its plants.

“If you think of a plant like a straw, it’s taking water from the soil and putting it into the atmosphere. The urban heat island effect is essentially increasing the size of the straw,” says Sam Zipper, lead author and former PhD student at UW-Madison.

As bigger straws, urban plants’ water reserves are likely to empty sooner, causing a bigger need to replenish and keep up with the atmosphere’s demand.

Importantly, this heightened need occurs during the peak of the summer growing season, when plants are typically already under water stress, a double whammy that could cause them to succumb to drought.

“The urban heat island effect increases the water demand when water supplies in the soil are most likely to be depleted,” says Zipper, who is now a Postdoctoral Fellow at McGill University in Montreal.

Zipper and his co-authors used data from a hard-working set of sensors installed in and around Madison, Wisconsin, which have been recording daily temperatures and humidity since 2012, a data set that has informed several other urban heat island studies. With these data, they were able to measure how much water the plants near each sensor would need to respond to the hotter urban temperatures without getting stressed.

What was most exciting to Zipper about their findings was just how consistent the pattern of a higher urban evapotranspiration rate was from year to year, whether the year was hot or cool overall or whether the air was dry or humid. This means a city’s higher air temperature was the factor that mattered in increasing the plants’ need for water.

The reason this consistency is interesting, says Zipper, is not only does it give us an idea of what to expect under a warming climate, which will exacerbate the urban heat island effect, but we can also expect cities everywhere to experience the same phenomenon. It also points to the importance of local solutions.

“We found the higher water demand was associated with a larger amount of impermeable, paved surfaces surrounding the plants, which means local actions may be able to help alleviate urban heat island effects in a city and mitigate increased water demands from climate change,” says Zipper.

Indeed, local investments in green infrastructure, such as green roofs and parks, could help keep urban plants alive, which has proven hard enough without the effects of a warming climate. With fewer plants, urban ecosystems experience less evapotranspiration.

In other words, those vegetation straws may be bigger, but there are fewer of them adding moisture to the atmosphere. This limited hydration is what causes city air to heat up in the first place and increases plants’ vulnerability to drought.

So by adding more green space, not only can cities increase their amount of evapotranspiration and cool the air, but they can also shrink the straws and, thus, decrease the water requirements of the surrounding vegetation, counteracting the urban heat island effect.

As the first known study to take such a detailed look at how the urban heat island impacts plant water requirements and why, this is a step forward in understanding the complex ecosystem that is a city and how to build resilience under climate change. The results also imply it is worth taking a look at how the urban heat island affects other hydrological processes in a city, such as stormwater runoff.

“Urban ecohydrology is an important discipline because urban areas are where most of us live,” says Zipper. “It’s essential to understand how water moves through these ecosystems that we interact with most frequently, so we can design healthy, livable cities while protecting water resources.”